This isn’t something I really thought I would or even want to write about but in the wake of recent events, it seems like the right time to do it. When it comes to Star Wars movies, I’m completely indifferent. I don’t have particularly strong feelings about them in any direction. Having said that, being indifferent to Star Wars somehow makes me a “hater” because of how much its rabid fanbase comparatively loves it. To me they always seemed like okay movies; I saw them when I was a kid but didn’t connect with them all that much, so I don’t have this burning nostalgia for them in my heart that others who really grew up on them do. I thought lightsaber battles were cool but that was about the extent of it.

Star Wars rarely seems to break into the realm of legitimately “good” movies. What works for Star Wars is that it is incredibly imaginative and because of that, they have a giant impression on children, who (and I know this hurts, fanboys) are the target audience for these movies. Yes. Star Wars, at its core, is a movie for kids, and there’s nothing wrong with that. The reason fanboys get so angry about Star Wars is their refusal to accept that. They enjoyed it when they were kids but they are not kids anymore, so when this franchise deviates from the established formula that they are nostalgically comfortable with, they throw a fit.

This isn’t all Star Wars fans. I am sure the vast majority of them are well-adjusted adults who have no problem with the franchise changing beyond Luke fighting Darth Vader. The problem is, well-adjusted people don’t make the news. No one wants to hear about people who politely enjoy things. Unfortunately, a loud minority of racists and misogynists are going to make the news every time, no questions asked. These are the folks that don’t want change. Change is different. Change is scary. Change is hard to embrace. It’s much easier to eat at McDonald’s every night because you know what you’re getting and that’s the same mentality that has driven these Star Wars fans insane; it’s as if McDonald’s changed their menu and that is unacceptable to them. So they have decided to viciously attack something they claim they love very dearly.

Just take a look at what has happened only in the last few months: Kelly Marie Tran (who was wonderful to watch in The Last Jedi) had to leave Instagram due to awful vitriol from “fans” of Star Wars; director, Rian Johnson has received numerous death threats for making The Last Jedi not fit smoothly with what is expected, no demanded, by the “fans” in a Star Wars movie and now there is a boycott of Solo, the newest movie, because these “fans” hate Kathleen Kennedy for trying to tell new stories within this universe. The message is clear and I’ve said this loooooooong before all of this ridiculous backlash took place: these fans do not actually want “new” Star Wars movies, they just want the same ones over and over again with a slightly new coat of paint to keep it a little fresh. They want it the way it was when they were kids; if it isn’t exactly like that, then it is not Star Wars. 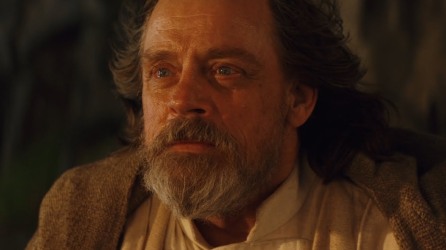 It’s mind-bending to think about. You have an imaginative franchise that takes place across a vast galaxy of planets and all you want to do is keep going back to Tatooine and the Death Star?? It wasn’t interesting at all to see an old and bitter Luke Skywalker? You just wanted him to come and save the day, yet again? How is that interesting at all? You had three whole movies of that exact thing already.

A friend once said to me, “but that’s not who Luke Skywalker is; he would never act like that.” Why not? He’s fucking made up. They can make him do whatever he wants. It’s not like they completely bastardized him; he didn’t grow a tail and breathe fire… a bad thing happened to him and they explained why that made him bitter. What’s the disconnect? You are absolutely allowed to not like it; you can even hate it, but you cross a line and make a complete fool of yourself when you threaten to assault anyone who was involved in making that creative choice.

You don’t own Star Wars. Nobody does (well, Disney does). Toxic fandom is nothing new. These are the same kinds of people that sent Damon Lindelof death threats because they didn’t like the finale to Lost. I get it, you love these properties and franchises and you get nervous about them being tampered with; you have an idea in your head of how they should play out and you get angry when it doesn’t go that way. But don’t you want to be surprised? Don’t you want to say, “wow, I never saw that coming!” If you perfectly guessed how an entire movie or TV show will play out, aren’t you upset that you knew the whole thing before it even started? You should want to be surprised. You should want to see new faces and new situations. I know you like The Force Awakens because it rehashed all the Star Wars tropes you already loved but do you really want to keep seeing the exact same movie over and over and over and over again for the next 50 years?