High school is a pretty good time to start watching Edward Norton’s hot streak of movies from the mid 90’s to the early 2000’s. They’re often very serious and not all that subtle. That’s a perfect combination for a high school-aged kid; you get to watch adult movies that deal with mature themes that don’t run too deep so that you don’t miss any real subtext. Norton hit the apex of this with Fight Club: the ultimate high school movie. It has big performances, enough pseudo-intellectualism to kill a liberal arts student and a crazy fucking twist. Even at age 16, I was able to look at Fight Club and think to myself, “Nah. This is a piece of shit.”

No matter how some of his movies turned out, Norton is an undeniably magnetic performer. He can play intensity with ease, as many dramatic actors can, but also slip into softer characters with just as much success (something over-acclaimed actors like Leonardo Dicaprio and Jack Nicholson are genuinely terrible at). The movie that allows Norton to flex both of those muscles is his big screen (and Academy Award nominated) debut in 1996’s Primal Fear.

Norton plays Aaron Stampler, an altar boy accused of murdering an Arch Bishop in Chicago. Richard Gere plays the lead character, Aaron’s lawyer, and honestly gives what should be hailed as one of his career’s best performances, but gets overshadowed by Norton’s meatier supporting performance (ain’t it always that way?). What we get, is a relatively standard courtroom thriller with just enough twists and turns in its pocket to keep you interested, buoyed by powerhouse performances.

What struck me as I re-watched it for the first time in at least 5 years is just how 90’s it is. Yes, there are the shaggy haircuts, parted down the middle, the goofy-looking suits and actors like Maura Tierney (who isn’t given enough to do) and Laura Linney (who should have rocketed to fame after this) to remind us that this movie was made right in the thick of the 90’s but there are also some indescribable features that place us in that decade. Maybe it’s the music cues, maybe it’s just the general swagger people held back then, I’m not sure, but if you showed this movie to someone without any prior knowledge, it’s likely they’d guess it was made somewhere between 1994 and 1998.

So, does it hold up, despite being undeniably 90’s? To be honest, I’m never quite sure what “holding up” means. Yes, there is the direct interpretation of, “is it still a good movie, all these years later,” but everyone seems to have their own take on what it means. It’s definitely dated but I also think it still works. The performances aren’t any less captivating today and the story structure still works well enough. So, if that’s the case, what would have to happen for a movie not to “hold up?” Short of new social and societal revelations, I see no reason why a movie should work in one decade and crumble in another. 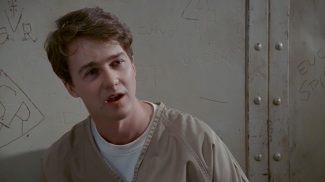 Primal Fear’s biggest asset is its performances and characters. Gere’s Martin Vail actually has layers that go beyond the normal “hot shot lawyer” archetype, not many layers… but layers nonetheless. Even the supporting players, like Andre Braugher have backstory that doesn’t smack you in the face. For a blunt courtroom drama about a sociopathic murderer, there is a fair amount of restraint at play.

Of course, Norton runs away with the movie, thanks to his character’s mid-story revelation of multiple personality disorder, but the snappy dialogue between the rest of the characters keeps you watching almost as much. There’s a certain composure these actors hold, that keep them from getting bogged down by some of the cheesier lines they’re forced to spit. And the quippy banter? As always, when quippy banter is done right, it’s nothing short of delightful.

I was talking about this movie with a friend once who said it was the perfect kind of movie to remake in the modern era. At first, I was intrigued by the idea, maybe giving it a new coat of paint could revitalize it for a new generation. Throw Bradley Cooper into Gere’s role, stick Scarlett Johansson in Laura Linney’s place and find a fiery new talent for Norton’s role… why not? But then I firmly stood against the notion. Beyond the fact that studios don’t make movies for $30 million anymore, this movie can’t be remade now because it would be trash. It should have been trash in the 90’s but it isn’t. Thanks to the right talent all coming together, the material is elevated to something much better than it had any right to be. Leave it alone. Don’t touch it. Look what happened to Total Recall, another clinically 90’s movie. When they tried to update it for the modern era with new actors, all of a sudden it became clear that it was the talent involved that made that cheesy movie work, not the convoluted story.

After watching it again, it became clear to me that Primal Fear doesn’t really have anything to say. It boils down to being an entertaining-as-hell film adaptation of a murder mystery novel you would probably see sitting on your grandma’s coffee table, with a menacing ending that I legitimately never saw coming (at age 16, at least). To me, that’s fine. Maybe not every movie has to be a musing on what it means to be human or what makes someone crazy (maybe we’re the crazy ones!!). Some movies can just be about a killer in a courtroom. Nothing wrong with that.