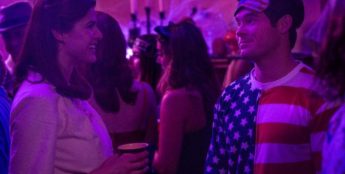 When We First Met is a true testament to the sheer force of nature that Adam Devine brings. For a movie that should be, at its best, “passably enjoyable while it’s on in the background,” Devine works 110% to bring it up to “passably enjoyable while you actually watch it.” It’s almost remarkable how hard he works to try to bring this movie up from mediocrity; his relentless effort is more interesting to watch than the actual movie around him is. He didn’t have to try so hard; he easily could have phoned it in and taken his Netflix paycheck and been on his merry way, but he doesn’t… he genuinely wanted to raise the bar for this movie and because of that, I have an incredible respect for him.

The movie functions as a rom-com Groundhog Day, in which Noah (Devine) needs to re-live the same night he meets Avery (Alexandra Daddario), the love of his life who friend-zones him because he waited too long to make a move. Of course, hilarity and hijinks ensue, or at least that’s what the movie attempts. Each time Noah goes back in time, he has a new method of flirtation he’s trying which leads to various different futures for him and Avery with equally varying amounts of amusement for the viewer.

Other than Devine, what helps sell the movie is how damn earnest it is. Its naïve charm works to its favor which is almost refreshing. In another world, there is a gross-out, hard R-rated version of this movie that would be an absolute slog to sit through. A version with constant F-bombs and genital references to cover up the lack of anything interesting. It was nice to watch something that was so unabashedly PG-13. Having said that, just because you’re PG-13, doesn’t mean you can’t take any risks. The movie’s biggest flaw is how squeaky clean it is even when it tries to deal with adult themes like sex, one-night stands, hookup buddies and drinking. In one timeline where Noah becomes hookup buddies with Avery after trying out a “douche” persona to woo her, he asks her what her favorite sex position is, but the movie is afraid of anything beyond a parental, focus-group approved impurity, so she never responds. “Yes, they can briefly talk about sex existing, as long the nice girl doesn’t admit to enjoying anything too salacious.” You can be 100% PG-13 and still try to have fun with it. The movie is essentially for high schoolers and everyone knows how much high schoolers love content that their parents approve of.

Ultimately, the movie continues to ride along on the charm of Devine alone. The rest of the cast just tries to anchor the world around him with varying success. Though she’s basically given nothing to do, Daddario is a pretty perfect choice as the girl Noah just can’t seem to get it right with but her fiancé, played by Robbie Amell, is about as interesting as a wooden plank. Why not make some of the other characters slightly interesting? Give them a personality of something more than just “person for Devine to bounce off of.” There is a good cast in here: use it! At the very least, Shelly Hennig gets to play a few more notes than the rest.

This movie accomplishes what it sets out to be: something that is on and offends no one. The problem is with that is it’s such a dreadful goal to have, let alone achieve. Of course, I don’t want the R-rated version but it would be nice to see this movie maintain its romantic earnesty while still showing us something even slightly exciting. I can see the executives trying their hardest to make this something pleasant to watch for everyone (maybe slightly skewering towards teens) but when you make something for everyone, you end up making it for no one. That’s why you have to hire Devine to lift the entire thing up on his shoulders and carry you. If we don’t get scenes where he thinks he knows the piano but doesn’t or him drunkenly exclaiming he has a “play-doh” face, or anything else he throws himself into, then there would really be nothing worth even mentioning about this movie. At the very least, we can say, “damn, Adam Devine really wants me to like this movie.”

It really is a testament to Devine: you can replace any actor with someone else and it wouldn’t make a difference but if you lose him, you should really just shut down production.