Kubo and the Two Strings has a lot going for it: breathtaking visuals, an easy-to-follow story, a lovable underdog hero and a stacked voice cast. But before I even saw it, I knew it would flop at the box office. I think there’s something about Laika’s animation style that doesn’t sit right with the general public. Audiences are used to the squeaky-clean stylings of Disney, Dreamworks and Pixar. Laika’s animation is not only stop-motion (which could turn off some viewers) but it also just looks a little grimier, but that works in its favor, especially for creepy fare such as Coraline or The Boxtrolls, but somehow in Kubo, that grime brings out a natural beauty in the production design.

The plot is incredibly straightforward and basically plays out like a video game. Kubo must journey to find a magical sword, breastplate and helmet, each one guarded by some sort of “boss” he needs to defeat or outsmart to ultimately take down his grandfather, the Moon King, in the final battle. If Kubo is defeated, the Moon King will take Kubo’s eye (he already took one at Kubo’s birth) and become immortal. Along the way, Kubo will be joined by his two sidekicks, Monkey and Beetle, and will also have to battle with the Moon King’s two henchmen at various points in his quest. There’s not much more to it than that; it isn’t all that different from a Legend of Zelda video game structure.

A straightforward story can be great though; of course it can be immensely satisfying when something complicated, like Inception, comes together in a grand finale, but not every movie needs to shoot for that. Kubo is content to tell Japanese folklore in the exact manner it needs. If anything, I would have loved for the quest to go on even longer. Show me a few more boss battles and adventures. It feels like as soon as the three main characters start to click, we enter the climax and have to start saying goodbye.

Charlize Theron and Matthew McConaughey are both great in their roles as the antithesis of one another’s personality. It’s really fun to hear McConaughey play a goofier role than we’ve seen from him in the last few years; it took me a while to remember that he has good comedic timing. How could he not after a string of rom-coms in the mid-2000’s? (Spoilers) He is so effective as a man-turned-beetle that the moment his character finally remembers who he once was, right before he bites the dust, is a genuinely touching bit and works infinitely better than any of the ham-fisted, tear-bait nonsense from Inside Out (go ahead, disagree. You’re wrong).

There are a few standout scenes, from a visual standpoint, that come to most people’s minds when reflecting on the movie: the giant skeleton battle is pretty thrilling and the final sequence where Kubo takes on the Moon King alone is a dazzling spectacle but the grandest of all is the series of events on the water. The animation of Kubo crafting a large ship out of leaves using his strings (I forgot to mention, Kubo has magic strings that can manipulate small objects) is a marvel and then it leads right into one of the film’s most expertly choreographed combat scenes between Monkey and the Moon King’s evil twin daughters as Kubo’s ship collapses. It’s incredible to watch and remember that it’s all stop-motion. Perhaps the most chilling of all during this sequence is while the battle above the water rages, Kubo must steal the magic breastplate from a giant sea monster with hundreds of giant eyes that attempt to hypnotize him until he drowns. This sceneis legitimately chilling to watch as Kubo goes lower and lower into the ocean and the number of eyeballs on him multiplies. The movie never quite recaptures the sheer magnitude of spectacle from those scenes but they alone are worth watching it for. 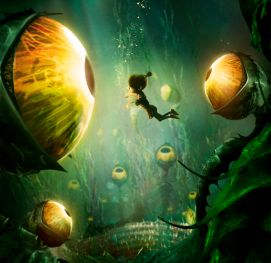 Some controversy about the whitewashing of the cast erupted as the movie was released and I think those concerns are legitimate, considering this is a classic piece of Japanese folklore but I applaud director, Travis Knight, and the whole Laika team for handling the material with so much affection. At the very least, the movie we are presented with is a great watch and comes from a place of earnestness, even though this may not have been a story for white folks to tell.

Stop-motion animation doesn’t really exist in any mainstream kind of way anymore. This year alone, we saw Early Man flop at the box office and Isle of Dogs, while a wonderful movie, isn’t something built for mainstream audiences. It would have been great for Kubo and the Two Strings to take off at the box office and show people that great animated movies don’t have to come from Disney or Dreamworks. They don’t have to pander but can challenge. Travis Knight and his team have moved on from animation (at least for now) to helm the Transformer’s spin-off, Bumblebee. While this is a bummer for the future of stop-motion, it may be a glimmer of hope for the Transformers franchise… but that’s not exactly what I’m interested in from such a unique voicein filmmaking right now.